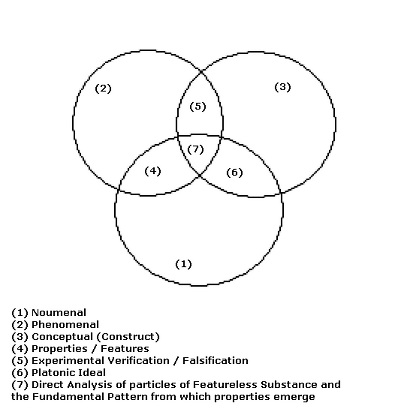 There would seem to be questions in Philosophy concerning the Noumenal, Phenomenal, and Conceptual worlds, and I believe that I have some of the answers.

You Kant say that.

Some of the criticisms of Kant's use of the term "noumenon" arise from his use of the term in a way (or two, or more; personally, I lost count, to be honest) that differs significantly from its use by the classical philosophers. His use of the term seems to cover, in addition to the classical noumenon, the imperceptible thing which is apprehended by "philosophical intuition" alone, and not by mere crude senses, but also the conceptualization of the object arising from our abstractions of its phenomenal presentation and theoretical "features". We would today call such a conceptualization a "construct", a handy term that finds greater use today in the hard sciences, across the wide ditch that some nameless idiot dug out between it and Philosophy and the other Humanities.

The Noumenal Object is Kant's "Ding an Sich", the "thing per se" or "thing as it is" that the classical philosophers held to be beyond the reach of human senses or material instruments; it could be apprehended by Mind alone, and only by Mind (perhaps Psyche, or even more loftily, Pneuma).

An example might help to illustrate the problem. The original construction of "atom" ("indivisible") came to be associated later with the elements of the periodic table; it could still, however, be presumed to be as smooth and featureless as a cue-ball. Then, one fateful day, someone went and broke this elegant, innocuous little concept and began introducing features and properties, not to the element and its propensity to combine with other elements, but to the atom itself! Horrors! Thus, our modern "atom" has all sorts of features mucking it up, like electrons, neutrons, and protons, which we now have the temerity and audacity to call sub-atomic particles! Indeed, either an oxymoron, or... just an historic change of conceptualization? The atom began as a "Noumenon", evolved into something resembling a platonic ideal, and then became a working concept, in an historical process. It's that simple.

The phenomenal object is the thing we can actually see and "lay our hands on". A brick is only as real as your ability to sense it; to see, hear, smell, touch, and yes, taste the brick. The noumenal brick is beyond anyone's ability to perceive or truly understand in and of itself, but the phenomena arising from it are readily available. Note that some phenomena are more available, however, than others; for example, the terahertz frequency EM emissions currently require very sophisticated and expensive equipment to detect, something that is changing as solid-state electronics continue to be adapted to new applications. While a brick may not yield any hidden properties to such a development, these new technologies have great promise in the material sciences and medicine.

The conceptual object can, in the modern sense, only consist of our knowledge of the phenomena which arise before us, the phenomenal object. We can form a conceptual relationship between these phenomena, giving us a model, both qualitative and qualitative, of how these phenomena arise together, and how they interact with the phenomena arising from other objects. ("Brick, fall to Earth!") Conceptual objects can also be related to each other through constructs, which need not be representations of objects, but handy mental tools. (Brick --Gravity--> Earth)

(4) The Features and Properties

The noumenal object has features or properties whereby it gives rise to one set of phenomena rather than some other set. These are the things that make your noumenal body different from a noumenal brick with, hopefully, a vast difference in phenomena. Or not. :P

We can handle an object, or use instruments upon it, all that we want, and never know its real features, as all we are working with are the concepts of our senses and instruments, in creating, validating, or invalidating a theory. The final performance is all there is to record, not the real reasons as to why the performance occurred the way that it did.

Here our phenomenal selves give rise to observation through the sense organs and other bodily capabilities, or through the instruments we construct, entirely by our accumulated knowledge of their phenomena alone. Note that such instruments are as conceptually close to their phenomenal state as our expertise allows, which in many ways makes them even more reliable than our own senses. (e.g. eyewitness testimony vs. unaltered video recording; bang-bang goes the banana)

An elegant theory has an aesthetic appeal all its own, but this artistic impulse, while welcome in Art, should always take a back seat in Science. This is the difference between the Platonic Ideals and modern hypotheses. A notable exception might be found in formulating a hypothesis in a relatively open field of research, where even so stingy a principle as Occam's razor may point us toward a theory which is both simple and what we might describe as "ideal".

Reflective Self-awareness: I am what I hypothesize myself to be, and no other hypothesis can be held to be simpler, more elegant, or superior in any other way. Denial of this principle by others is a tragic self-fulfilling prophecy.

Now we have arrived at the hunt for the mysterious Snark. If we only could detect the most fundamental and unvarying particle, the "Substance" of the ancients, we would be able merely to sketch their arrangement in any object at all, and know ALL of its properties at a glance. It's further imaginable that we could create novel arrangements, and create particles, substances, and objects not seen since the big bang, if EVER. It would make the neutron-enrichment of Uranium-238 look crude by comparison.

Reflective Self-awareness: I am becoming my True Self, Substance becoming fully self-aware.

Community content is available under CC-BY-SA unless otherwise noted.
Advertisement